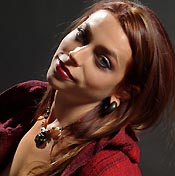 There is perhaps a distorted perception of shamanism in our culture, for what it is seen to be is as broad as people’s understandings of the word ‘God’. My own understanding of shamanism is grounded in the ancient multicultural, global phenomenon found universally in every continent and language. I realize that all tribal cultures developed their own ways of practicing shamanism and connecting to spirit. It is these traditional, tribal peoples of the globe that I mean to honor, and give no disrespect. I mean no disrespect to the neo-shamanic practitioners of modern America, who are doing their best to find their way to bring spirit to people. I realize that a broad spectrum of people have a hard time accepting that a spiritual lightworker could be in service to humanity through erotic bodywork; and yet there are those in our culture who are bridging this river and I am one of them.

I have looked towards Quan Yin as a role model of unconditional compassion, in my work. Quan Yin’s attitude is that she made a commitment to work on behalf of every person’s enlightenment on earth, to release the suffering of humanity, remaining nonjudgmental toward every person’s karma and story—open to receiving any person with love. I have sought to bring that spirit of unconditional loving presence and nonjudgmental consciousness to all my clients. And while I have sought a completely different path, lifestyle and evolution than those people who come to visit me, I realize that I have become a source of light, inspiration, hope and joy for them because I am carrying a unique vibration in the world due to my path.

The last several years, my path has been illuminated by waves of the ecstatic, shamanic, multidimensional and mystically vibratory. Chanting, Dancing, Visionary Plants, Kundalini Awakenings, and Multi Orgasmic Lovemaking were the keys that unlocked the doorways to higher dimensions of insight that fundamentally reconfigured my experience of reality, and helped me remember my soul, to remember the infinite and be dedicated to being centered. Before the universe opened its doorways to help me reconnect my spirit to my body, I spent a few years studying mysticism, Rumi poetry, Reiki and ecstatic chanting. During this time, I lost my ability to be a normal functioning drone slave to the system. My focus was entirely on creativity, channeling, ecstasy and relationships. I bucked against the work of being a slave that sought to slaughter my creativity, and I was consistently losing my jobs because I was on such an internal journey. After much financial desperation, hopelessness for my future in this economic culture, and mind blowing creative, ecstatic & synchronistic exploration, I fell into the world of an erotic massage parlor.

One experience that I had on an almost daily basis was that of working with men who were not present; they were completely disconnected—from me, from their body, from their emotions. I had the repeated experience of working with a man who laid on a massage table, his mind somewhere else, not paying any attention to me, his body having a physical reaction like sneezing or pooping, with no emotional response to the experience. These men’s bodies, minds and emotions were all completely on different planes; completely disconnected. It’s really hard to work with men like this, because they think it’s the only way to be.

I was about to give up completely on this work, because it wasn’t feeding me, and it wasn’t in alignment with my spirit. At that moment, a book appeared in my life; Women of the Light: The New Sacred Prostitute. I was inspired by Women of the Light to seek a way to bring healing into this work. It seemed that other women had found ways of doing so, and it inspired me. Helping men to be present; with me, with their bodies, integrating their minds with their sensual bodies, became my goals in transforming my work. Thus began more than a year and a half of intense experimentation. I began integrating what I’d learned through Buddhist Mindfulness, Chi Gung, Yoga, psychedelics and shamanism—and I began exploring books on Tantra to find something that could help inspire transformational healing through this work.

I believe that one day, when our culture enlightens and decides to decriminalize marijuana, let gay people publicly and lovingly embrace each other in their chosen union, and people use alternative energy instead of sucking the blood of the earth out of other countries; perhaps then will people begin to realize that Tantric Bodywork is a healing art on par with practitioners of Acupuncture, Yoga, and Massage Therapy. Thus Tantric Bodywork will be decriminalized and will be embraced as a genuine therapeutic healing modality, and will be taught in schools so that there are high standards for practitioners. In that world, practitioners will be highly trained in the arts of bodywork & embodying the goddess. This evolution is already underway. In the last two years, Tantric Bodywork has seen a nationwide explosion in every major city, and it is well on its way to becoming a nationwide bodywork modality.

When I began venturing into the world of erotic bodywork, I had spent more than a year practicing Reiki as often as someone would allow me to. But I had no experience with massage. I felt immensely inexperienced and unconfident about my massage abilities. My boss and fellow coworkers gave me a five minute introduction, which consisted of watching a naked lady give a naked man “feather light touch”—lightly stroking the body. No one cared to tell me that I would be wanking my clients; it was my clients who informed me what my real work was. They insisted that I touch them. I had always been a very mental person, and had always had a difficult time being in the orgasmic flow because my mind was always so overwhelmed by the intensity of going over the edge. This, coupled with my fundamentalist Christian upbringing, had me dealing with shame and guilt about sexuality and pleasure. Shame that I couldn’t surrender to orgasm, and guilt when I did and brought others to that place. I pondered what my traditional Ohio farming grandparents would think if they knew what my new vocation was.

Tantra is about Union—union with love, orgasmic union; union with the divine. In these days where culturally we are scattered, distracted by television, drugs, celebrities and politics, overworked, overstressed, under-loved; consumers walking about disconnected from the person standing next to us—Union is not an experience we daily embrace. Many of the clients I have seen for the last several years have told me story after story about how their spouses have completely cut themselves off; emotionally and sexually. Stories of women who refuse to make love, refuse to cuddle, refuse to hold hands. If it is a culturally rampant phenomenon that spouses are disconnected from each other, then the experiences of Tantric Union with our beloveds is a culturally rare and prized phenomenon.

The potential lies dormant within every one of us to experience profound lovemaking, but with so few people putting divine tantric union forward as a priority, it seems we are all broken beings, wandering lost through the maze of “reality”, wondering when our soul’s desire to be Met and Loved will be experienced. Instead, we settle for less than our heart’s desire, for a reality that we shake our fists against; wondering when the suffering and stress will be relieved.

It is in this world that I find purpose—I have found that people need a safe sanctuary where it is possible to let go of everything else in the world, and take time out for themselves. My bodywork space is my temple; dedicated to being a haven of the sacred, a home for the embodiment of spirit, filled with altars, sacred objects, plants, art, dreamy sensual music, blissful scents. My space is home to Quan Yin, crystals blessed by the Entities of John of God, quartz crystal singing bowls, and as much elemental earth energy as possible. I am deeply connected to mossy wilderness, telluric energy from Lake Titlan, oceanic tidepool flow, the spirit of Heron, crystalline energy from the core, and the vibrational energy that overtone singing & singing bowls embody.

When clients walk into my space; they subconsciously realize that they have come for more than relaxation and an erotic release; they come to be centered and take time to be still and open themselves beyond their mundane. Many clients comment on the immediate effect walking into my sanctuary brings them. Its effect is almost immediately relaxing. I have come to realize that if Corporate America chose to create a temple sanctuary in every corporate building—where any employee could come for a five minute grounding / breathwork / chi gung / hugging break, instead of a five minute smoking break—every employee would be more efficient and productive, because people would have time to relax, for even five minutes a day, to release the built up stress and frustration of this over-productive fast paced lifestyle that eventually drains everyone’s energy. This is why people in these days of Patriarchal Government and Global Corporate Monoculture, everyone secretly worships the unconditional loving presence of the Goddess. The Goddess becomes the ultimate heroine for this culture that is disconnected and stressed to extremes.

My intention with the work has been to be a therapist skilled in the arts of stretching, sensual meditation, full body erogenous activation, energy building and energy movement. I have explored many tools within myself to discover that which would be the best tools to use for my clients. My personal meditation practice and energy clearing practice have been focused on the combination of breathwork, chanting, intuitive chi movement, yogic stretching, body awareness, prayer and connection to the earth. This has inspired an erotic bodywork that combines breathwork, overtone chanting, body awareness meditation, traditional thai bodywork stretching to receive the benefits of yogic stretching passively whilst doing no work, prayer and connection to the earth. I have found that this has become a powerful healing modality that transforms almost every client who walks through my door, restoring balance, flexibility, relaxation, bliss and inner peace.

I now use my clients as my opportunity to meditate on experiencing every moment and every man as God in form. I meditate on the union with their body, as I build the sensations in their body and keep them focused on their breath. I have given myself to be sensualized within a ritual container and have explored the rush of my own sensations of euphoria. It is beautiful to discover that it doesn’t matter who the person is; it matters how present you are with each person.

It has taken me several years to arrive at a point where I feel confident in my skills as integrated therapist, bodyworker and energy worker. And I have done so with very little training; most of my education came through personal experience, experimentation, books & inspired intuition. This work has given me the blessings of stability, income, creativity, the freedom to travel, and meaningful work that disciplines me to be present and in a meditative, centered state every day.

Wahkeena Sitka Tidepool Ripple resides in Portland, OR, having relocated here three years ago. She is a bodyworker / energy worker by trade, an artist at heart, and a vocalist & dancer in spirit. She lives with her kitty and enjoys the exploration of eternity one moment at a time.

Wahkeena can be reached by email at [email protected] Her website may be viewed at: http://illumin.escens.org