Fall 2001 If It Smells Like Hell It's Probably Pictsweet: The Mayor of Salem Speaks Out About Human Rights on the Home Front by Mike Swaim America's most progressive mayor, Mike Swaim of Salem Oregon, sets the record straight about corporate conduct, labor organizing and basic human rights. So why can't he get a fair hearing in his own hometown newspaper? 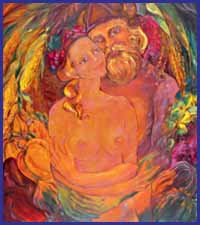 can pick up on his investigation of the most reliable medical sites on the world wide web.

Follow the Money: Focus on America's Failed War on Drugs Prohibition Laws: Why They Must Go by Shannon Floyd Millions of American citizens have been lied to, stolen from and victimized by the War On Drugs, a grotesque public policy that breaks all its promises while delivering vast wealth and power into the hands of the corporate few.

As the Summer of the Victim Turns to Autumn of the Tyrant Choose Love by Leslie Temple-Thurston A teacher devoted to spiritual principles and practice connects the inner world of personal transformation with the outer world of social activism.

Taking Refuge: Reflections on Service by SarahJoy Marsh The commitment to compassion, right livelihood and service takes the seeker to unforeseen psychic and social territories. When is service to others a form of self exploitation and when is it our soul work on earth?

Dreams of Kindness, Love & Grace by Carolyn Berry The quest to find the perfect mate can create the story of our lives after a decade or two of the search. Each "significant other" gives gifts and increases our knowing about who we are and what we want to give and receive in a love relationship.

On The Path: Conscious Love 795 by Bob Czimbal How do you find your life partner after all the experimenting and personal growth work? Bob publishes his list of the top ten attributes he was looking for in a mate, and how they found each other.

Leaving Home: Disaster on Earth-End the Denial by Ness Mountain Politics offers a screwball scramble of broken promises and trashed treaties. The current administration's arrogant dismissal of the Kyoto Treaty re: Global Warming brought cries from around the world. Are we above this fray or is there a more intelligent response?

You Say Liberal Media, I Say Trivial Media, Let's Call the Whole Thing Off by Rick Marianetti Disingenuous propaganda from political "conservatives" (what is that code for?) smears most media as being liberal (whatever that means) and controlled by the "Left". Never mind that all the major media are owned by giant corporations which are in turn controlled by the same interests conducting the smear campaign. Why is it only possible in independent and alternative media to call for ethical and intelligent standards in journalism?

Alternatives Magazine is taking the American paradigm out to lunch. Alternatives works (and plays) with the ideals and activism of our emerging culture and provides a forum to express and/or locate the holistic ideas, goods and services that support a life well lived.

Alternatives for Cultural Creativity recognizes that our society is in transition and that an integral culture is emerging out of the context of dominant American society. We see this integral culture as concerned with values focused on spiritual transformation, ecological sustainability, holistic health, political and economic justice, self-actualization and expression, and enlightened parenting/family relationships.

Culturally Creative people are putting the pieces of the global puzzle together in a dynamic and entirely new way, and coming to a holistic understanding of personal and planetary relations. Alternative people are open to the ecstatic possibilities.