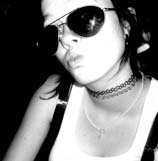 Perching on a cold-metal bistro chair outside the coffee house, my damp clothes turn as grey as winter’s sidewalk. Here is where my friends and I freeze and freely express ourselves. When I think of it, I can sense my parents there too, hovering like ghosts behind the smoke plume of my cigarette, just a cell phonecall away. They’re keeping tabs, alternately wondering and worrying. What do they hope for, and want, from me?

Cutting into that question is like slitting into a deep wound. The question changes to, what do my parents hope I won’t become? I know they didn’t raise me to scar my body or chain-smoke in the rainy depression found downtown in Anywhere, USA. But, when it all goes wrong at some point, and you hit that point, its like, “Damn. Here it is.” No evading, no hiding. Raw emotion that your parents never warned you about.

Parents teach the general basics, plus some more shit that isn’t immediately relevant, and might never be. Maybe they even believe their own cheerleader hopes & dreams about all the great things that their kid will accomplish in life, but it’s all the same eerily predictable message in the end: grow up, find someone, reproduce, teach your offspring the same shit, and then die. You hear about divorce as a kid too, some of us even experience it, but it just seems surreal when you’re young.

Why do parental units try so hard? Most parents put 110% effort into making sure their kid turns out fine. They make their plans and raise us to be . . . whatever, just fill in the blank,—but most kids I know end up saying “FUCK YOU” and go off in any opposite direction they can find!

I have a theory about why parents try so hard to perfect the impermanent. Maybe they lack purpose and meaning in their own lives, and when they regret how things turned out for them, they yearn for something different . . . for someone else. Their kids.

Then the inevitable happens. Kids rebel, with exquisite anger. I’m in the teen phase of the uprising, but I think it may take years, perhaps an entire lifetime to perfect the rebellion against these original authority figures. It’s a process I’ll practice till I find something bigger to rest my tired mind on. Right now, it’s all I have, that and a job. And I’m lucky—most people my age couldn’t find a job they like if their life depended on it.

This “parent/child” rebellion relationship brings up another question; if parents could know in advance that their strategies with their kids inevitably lead to rebellion, would they raise us so that the pain of it would be easier to take? Would they try to get the balance of discipline and permissiveness just right to make the child rebel—but only to a point, after which it’s so boring that the kid moves on to bigger things, like their own life? How would that work? Just enough conflict to create the rebellion, just enough nurturing to move quickly through it?

Nature v. Nurture. Are we taught to be like this or are we born to be like this? Either way, do we have any choice? And why do we sometimes become what we hate? I know so many adults who just absolutely loathe their lives. I’m only 16 and I can already imagine how easy it would be to let myself slip into a 9 to 5/paper & deskwork/suit & commute routine, complete with husband and kids in the suburbs. I know that everyone in my circle says that they don’t see themselves going in that direction . . . and maybe we won’t, but we’re young, and what do we know about how life really turns out? Most of our parents ended up like their parents, so what real chance do we have for a different fate? Still, I don’t honestly think of myself as an American homegrown, “would you like fries with that?” girl. Engage me into something deeper please, before I blow my brains out on your glossy business shoes!

Being a “girl” in standardized America is no easy task. I was raised to respect my elders, dress neat & clean, and eat organic vegetarian. I’m still a vegetarian, and I respect my elders, but only if they respect me. But now I smell bad (odor is natural), I act vulgar and swear, I spit on the ground and play hackey-sac. I was raised to tell the truth, both complimentary and in-your-face. I just happen to be practicing my “brutally honest” phase right now, even if it gets me into trouble sometimes with fragile people. Rather that than deathly polite society. I will NOT be hushed by any male, or any majority. I am who I am. No joke.

As far as scars and chain-smoking are concerned, it fills up empty time, and is, as much as I hate to admit it, socially acceptable (within my own alienated circle). Freezing our asses off and speaking out mad ideas and concepts are what my friends and I do for fun. We hush for the drama and speak not of the unresolved. Grey skies follow grey eyes, grey moods and grey coffee. Everything turns grey after a while, like thoughts on parenting.

Asia Kindred Moore lives in Salem, Oregon, where she attends 21st Century High School and works at the Coffee House Cafe downtown. Asia can be reached at [email protected]