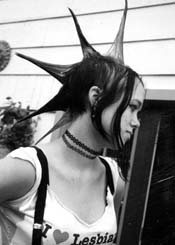 We are teens with a practice, and that is to engage our bodies and minds into the art of hackey sac. It is the dance of grace and body control, and it clears my mind better than any psycho-pharmaceutical anti-depressant ever did.

Hackey sac was first introduced to me when I was eleven years old, playing on Capitol Hill with my older sister in Seattle. I was immediately interested in this new sport, and by the seventh grade was completely infatuated with it. But as my early teen years wore on I grew disinterested because I was mostly too drunk all the time to really focus on the bag of sand flying towards me.

This summer brought it all back. With a newfound love and newfound friendships (and no more drinking) I began to play again. This was no longer an infatuation; it was a committed love affair! I have played hackey sac through rain and shine, snow and wind, every day for the past four months.

What I love about hackey sac is that everyone’s style is different; there are uncountable stalls and tricks, there are mass playing groups or just one person by themselves. Possibilities are endless, just so long as the hack stays in the air.

Not everybody gets it. Who can blame the un-initiated un-player for their in-difference, or even their ridicule of this primitive simple-minded game? After all, it’s just a lumpy little bag of sand that spends its life being kicked, clunked, toed and tortured while kept in the air at low altitude till it inevitably splats onto the pavement or in the gutter, only to be picked up again and kicked around some more. Where’s the art and the drama in that?

So much for the ignorance of the uninitiated.

Like everything else in life that is worth anything, the value is in doing it. Hackey sac teaches some basic genius things about life: no stealing, no hogging, and no apologies for being who & how you are. If you drop it out of lack of experience, just pick it back up and start again. I love playing with experienced people and inexperienced people; it doesn’t matter because the game isn’t over until everyone has hit it at least once. When this is accomplished, you can go for double hacks, or triple hacks, sky’s the limit till the sun goes down.

This simple sport astounds people, especially when we really get going. The flow of the hack and the blood pounding, adrenalin pumps through like speed and everything is blurred out…except for that hackey sac. You never have to consciously impress people, it just happens. “Whoa” they say in awe as Tim performs one of his amazing “did he really do that” stalls. Then we bust into the long range, gotta-run-and-dive-for-it kind of game.

Little kids are the most inclined to want to watch and join. Just the other day there was the cutest kid ever, standing with his dad watching us play. We’d drop it and he’d laugh, toddle over, pick it up, look at it like some little professor examining a new species, and then hand it back.

There are times when we’re playing on the sidewalk next to the coffee house and it gets out of hand; the hackey sac flies off toward some passing pedestrian. I tense up, “this could be bad”. But no problem, they’re cool, they just kick it up and back to us, then keep walking on their way.

Hackey sac must have been around for awhile, years maybe. I suspect there are lots of people who know how to play but don’t anymore. Or maybe people who used to play but no longer do, for reasons of professional anonymity, or previous injury, who knows. And then there are those you’d never expect to play who just bust out with amazing moves, out of the blue.

My love for hackey sac is no crime; no big deal. Just as other kids like to play computer games or watch television in their free time, I like to play hackey sac and sing while I do so. It could be worse.

Asia Kindred Moore lives in Salem, Oregon, where she attends 21st Century High School and works at the Coffee House Cafe downtown. Asia can be reached at [email protected]